The symmetric/Concentric drilling system is designed to drill and case a hole simultaneously through unstable ground conditions. The driver bit incorporated with a satisficial ring or reusable ring makes a full face head design which significantly improves the penetration rate and hole straightness of drilling. The internal flushing grooves together with the built-in casing shoes gives a good seal to the button of the drilling hole, and thus minimizing the disruption of the surrounding of the drill hole.

Application Range: It is suitable for drilling water wells , geothermal wells , short miscopies ,medium mini-type grouting hole of building , dam and harbor project .
1. Ring bit and casing shoe assembly is welded to casing prior to drilling. Lock the assembly into pilot bit with hammer. The pilot bit's upper shoulder engages the shoulder of the casing shoe.
2. Hammer's percussive energy is transferred through the pilot and ring bits, crushing rock . Part of impact energy advances casing.
3. On completion of drilling and casing , the drill string with pilot bit is retrieved by a slight reverse rotation to unlock the bayonet coupling . The ring bit stays in the hole , and can be recovered only if the casing is retrieved
4. Drilling continues to the desired depth in the bedrock using a conventional drilling. 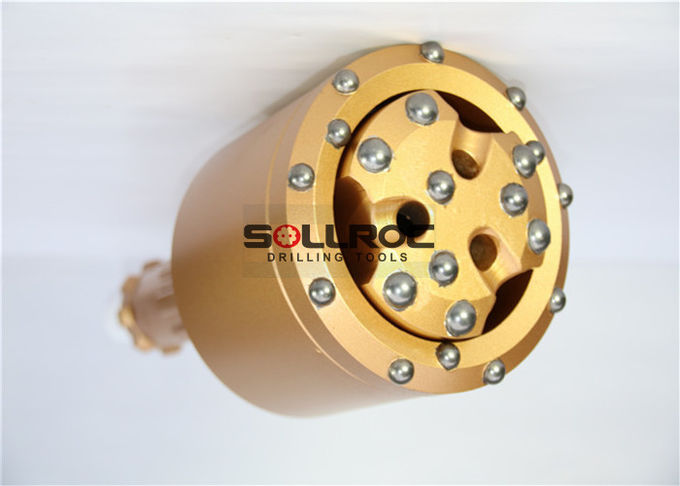 Quality warranty:
SOLLROC products are made of high quality steel and all spares are inspected strictly at every production steps before shipping. We have quickly responses for your complaint and suggestion.

Package:
Using plywood cases and pallet for seaworthy to protect products and avoid the damagement during transportation by sea. Using cartons and plywood cases for air worthy to less the weight and save the freigth. Also we can customize package according to your special requests. Special mark is available.

Transportation:
By air, by Express or by sea according to your requests.

SOLLROC is a leading manufacturer of rock drilling tools, like DTH hammers and bits, DTH drill pipes, RC hammers and bits, tophammer button bits, coupling, cross bits, drill rods located in Changsha, Hunan, China.
We have rich experience in this field of DTH hammers and bits for 20 years.
Owing to high quality, professional serivce and competitive price, we have gotton good reputation from our customers all over the world, such as France, Spain, Italy, South Africa, Australia, Iran, Malaysia, etc.